Screening dedicated to the "Lebanese Family" by the filmmaker Danielle Arbid.

Screening and meeting with Danielle Arbid

Danielle Arbid's cinema makes the Lebanese family novel the very space of the film, an adventure ground, a motif to be explored, a territory of language. In all her films, the regulated play of speech is the cardinal place of a linguistic conflict. Through short and feature films, his attention is indeed focused on the space of dialogues that fully carry the action and the progress of the narratives that scandalize all his films, are so many micro-stories engaging the history of Lebanon past or recent.

The screening will be followed by a discussion with the director and Pascale Cassagnau, head of audiovisual and new media collections at the National Center for Visual Arts (Ministry of Culture), and an exchange with the audience.

Filmmaker and video artist, Danielle Arbid works at the crossroads of genres. Her fiction films, Passion Simple, Peur de rien (Fear of Nothing), Un homme perdu (A Lost Man), Dans les champs de bataille (In the Battlefields) have been selected for the most important festivals (Cannes, Toronto, New York, Pusan, Tokyo, etc.) and have won numerous awards: the Golden Leopard Video Award in Locarno for the seriesConversations de salon (Living Room Conversations) and the Silver Leopard Award for the documentary Seule avec la guerre (Alone with War), for which she also received the Albert Londres Prize. Her work has been the subject of several retrospectives around the world (Gijon, La Rochelle, Florence, De Popoli). She is also a photographer and actress.

Her latest film Passion Simple (Passion Simple), an adaptation of the novel of the same name by Annie Ernaux, was in the official selection of the Cannes Film Festival 2020, in competition at San Sebastian, Toronto, Zurich... Danielle Arbid represented the Lebanese pavilion at the Venice Biennale in 2022 with Allo Chérie, a short film from the series "My Lebanese Family". She has also just received the Alice Guy award at Fid Marseille 22. 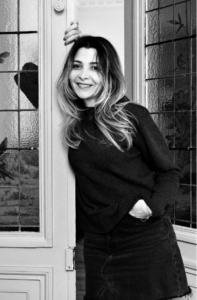