Underground icon of the worlds of art, fashion and nightlife, Vava Dudu has traced her path for thirty years, between Paris and Berlin, following only one line, her own freedom, affirming that she "prefers the extremes to the middle ground".

"I invite you to come and dance to my sound and colourful ambiences, vynil mix and paintings on your textile bodies, the new wave zouk electronic sound, I unleash my punk discotheque on the dancefloor. And if you wish, join me on stage so that I can tattoo your favourite garment with a magic brush stroke".

Born in 1970 in Paris, Vava Dudu studied in a preparatory class at the Beaux-Arts in Paris, before joining the Académie des Grandes Terres and Fleury Delaporte's fashion design classes.

An unclassifiable figure, this multidisciplinary artist has never ceased to evolve in the world of creation without ever really settling down or conforming to it. A designer, illustrator and "lover of lines and colours" in her own words, Vava Dudu also makes furniture, customised guitars and plays in the synth punk band La Chatte. She designs jewellery (in 1997, Jean-Paul Gaultier invited her to imagine the pearl corsets for his first haute couture collection) but also "chic and zany" clothes.

More than a decade before the mix between couture and streetwear became the prerogative of designers like Virgil Abloh, Demna Gvasalia or Matthew Williams, Vava Dudu made it her spearhead, borrowing from the street as much as from the club, the creativity and energy of their silhouettes to marry it with her love of the handmade, from embroidery and sewing to painting on textile.

Vava Dudu has always gone against the grain of the clothing and fashion industry, and at a time when ecological awareness is spreading to all brands and fashion houses, she customises numerous recycled pieces, spends hours gleaning second-hand clothes and textiles, produces constantly but not in fixed quantities or collections, and only sells her creations on order or in selected boutiques... all of these are biases that she adopted two decades ago and that a good number of designers are trying to imitate today.

Vava Dudu has dressed Björk, Tom Cruise and Lady Gaga, for whom she designed the graffiti trench coat worn in the video for Bad Romance in 2009.

In 2001, she received the prestigious National Association for the Development of Fashion Arts award.

In 2019, Courrèges commissioned her designs to be turned into prints for their collection.

In 2012, Vava Dudu's work will be exhibited at the Confort Moderne in Poitiers, which will invite the artist for a solo exhibition whose content will evolve over several months. The Palais de Tokyo, Lafayette Anticipation, the Frac Poitou-Charentes, etc. will follow. 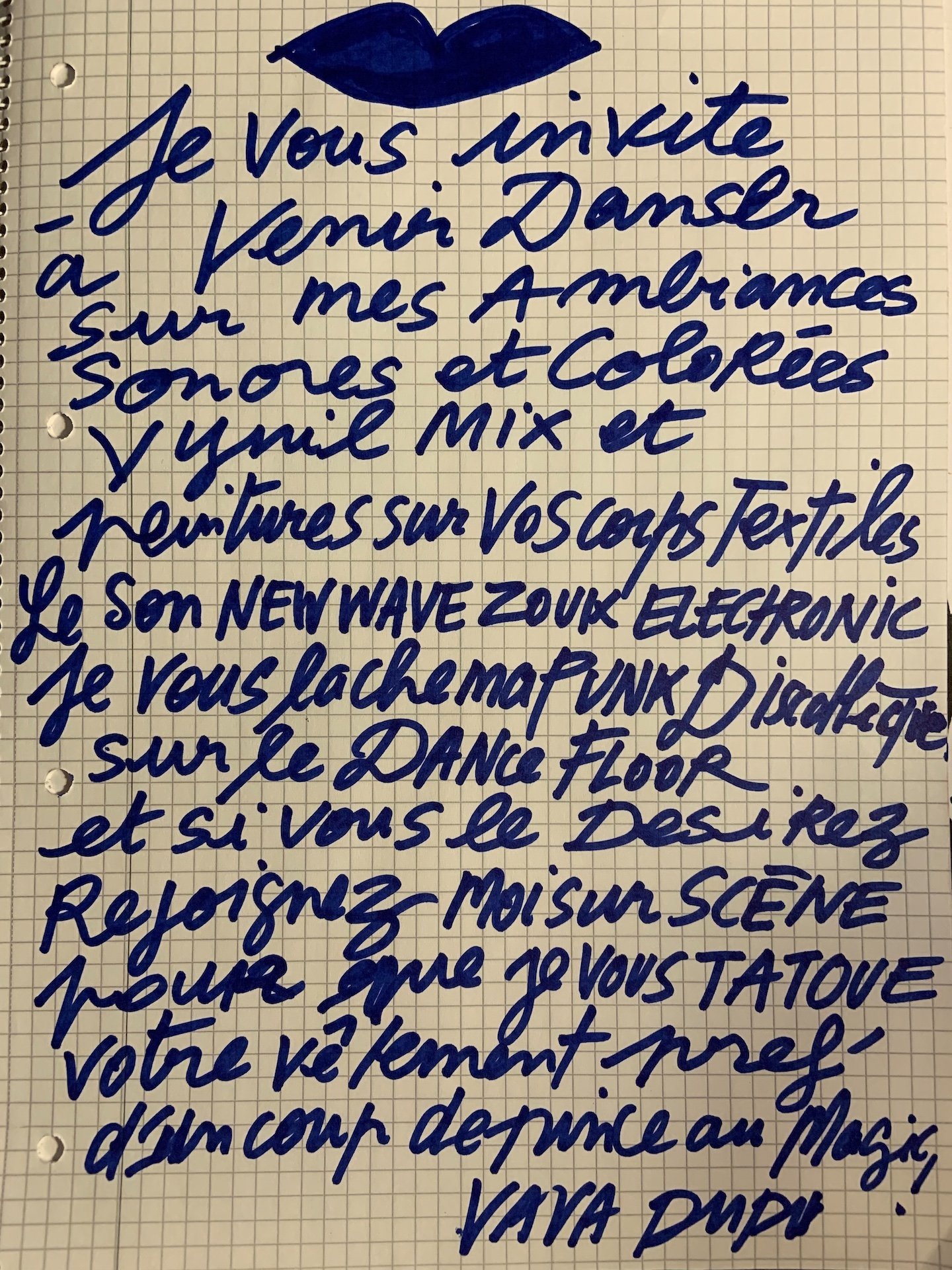